After just five months of being a chicken mom, here are some things that I can personally attest to:

1) Roosters crow very loudly.
2) Every rooster has a unique crow. Like our individual voices, each rooster sounds different.
3) Roosters generally like to be the only rooster in the flock.
4) In flocks where there are two roosters, one of them is going to be the dominant one. They aren't going to share the job.
5) The dominant rooster will randomly, and for no particular reason, beat up on the less-dominant roo.
6) The dominant rooster may even try to run the less-dominant roo completely out of town. Really.
7) Sometimes hard decisions have to be made.

Regarding Point #1 (roosters crow very loudly), you already knew this, didn't you? 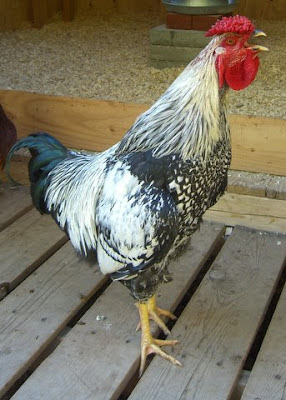 I, personally, was in serious denial about it. I thought it would be cute. Still do, actually. However, my husband didn't and doesn't. After explaining, in a previous post, the no-rooster PROMISE that I made (and then wickedly broke) to my husband, I thought I should let you know that we (my Jim and I) have come up with a compromise-slash-routine that seems to be working for us. The result is I get to keep my roosters (for now) and Jim isn't woken up by Roopert at o'dark thirty every morning.

8:15PM - 8:30PM - The chickens run back into the coop and begin their nightly rowdy roosting ritual.
8:35PM - The bickering begins to subside and the chickens finally agree on who should be where.
8:45PM - I sneak into the coop and scoop Roopert up into my arms. He used to fuss at me, but now he's getting used to the nighttime journey.
8:50PM - Roopert is placed in his big dog crate for the night.
8:51PM - After a quick story and a kiss on the head, I say goodnight to Roopert and punch the button closing the electric garage door.

Jim can't hear Roopert in the garage and Roopert can crow as early in the morning as he wants to. Roopert comes out once the rest of the household is awake. Everyone's happy. Right?

Regarding Point #2 (every rooster has a unique crow), Pip, our second rooster, is allowed to remain in the coop overnight, because his crow is much quieter. He has not, up until now, disturbed anyone's early morning ability to sleep: 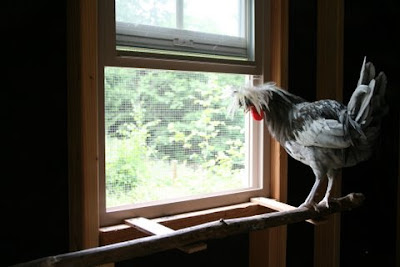 Point #3 (or, roosters generally like to be the only rooster in the flock) is made clear just by watching Roopert. That's him inside the tub: 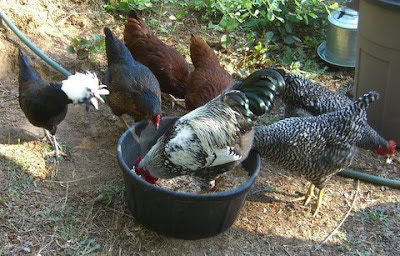 Roop's very much the ladies' man and is at his best surrounded by his girls. On a good day, he ignores Pip following him around like his shadow, mimicking his every big boy move. On a bad day, he's nasty-evil to Pip. 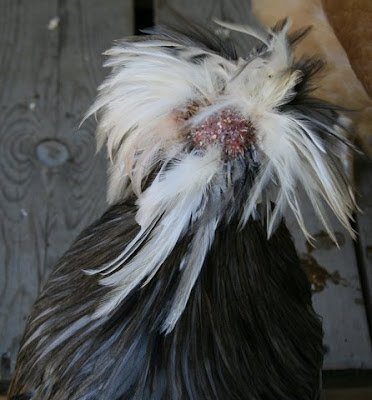 Imagine never knowing when you're going to be walloped up side the head by this big guy: 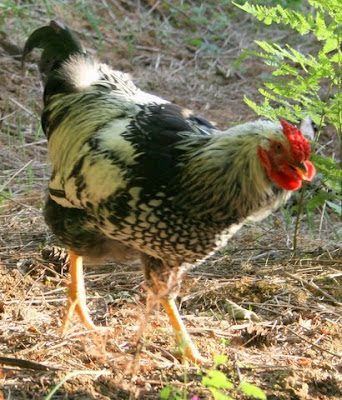 This situation is more difficult to solve than the crowing was and I fear a relocation may well be in Pip's future. He recently spent the whole night outside -in the open- because our entire family couldn't locate him after Roopert ran him off. We thought he was a goner. But, early the next morning, there he was, crowing away from the middle of a blackberry patch, almost like he was asking to come back home.

Pip is such a funny bird...he definitely adds an interesting dynamic to the group: 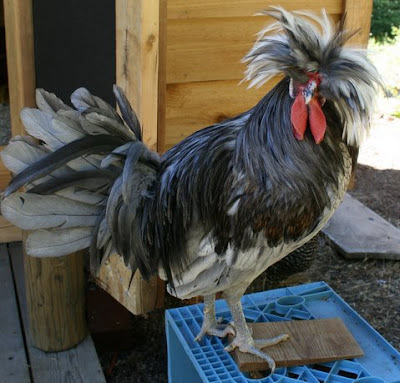 But no matter how mighty he tries to make himself: 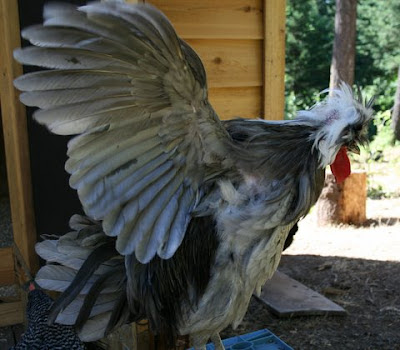 He's still the low man on the totem pole: 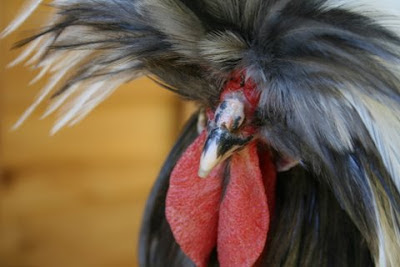 And so, Point #7 (the difficult decision) is still in the air. Will the garage crate solution work for us, and Roopert, long term? Will Pip and Roopert be able to work out a peace between them?