The vet visits the big animals 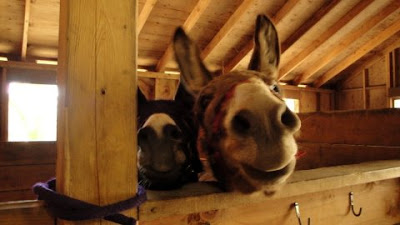 So maybe you're wondering what happened with all the other animals on the day Dr. Sarah, our small town vet, came to visit? Despite the Reggie-the-goat-scur-emergency, and no matter what he may have told you, it wasn't just a Reggie day. The llamas and donkeys needed some attention, too.

The llamas got their annual vaccination against CD&T (clostridium/tetanus). You can see by Toni's face how pleased she was about this: 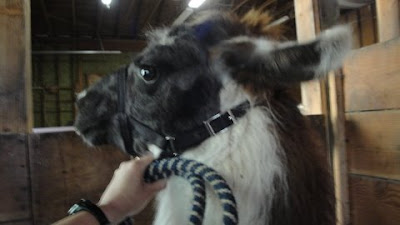 Dolly, as usual, took everything in stride: 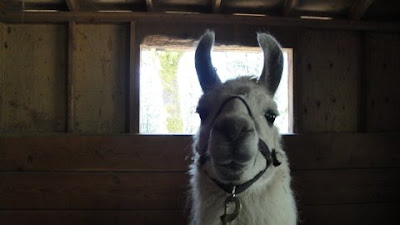 There's no picture of Kai because she is, without a doubt, the most intense and feisty llama of the trio. She spent most of her injection time rearing up on her hind legs and spinning in circles trying to get away from Dr. Sarah. Not fun.
But, we got it done and the llamas are now protected for another year. Phew.

We discussed Toni and Kai's skin condition again. The last time she was out, Dr. Sarah had given them all shots of Dectomax for any internal/external parasite problem. Since then, I had purchased Betadine, washed their backs thoroughly and applied a product called Nu-Stock, purported to be effective against pasture fungus, rain rot, ringworm and saracoptic mange: 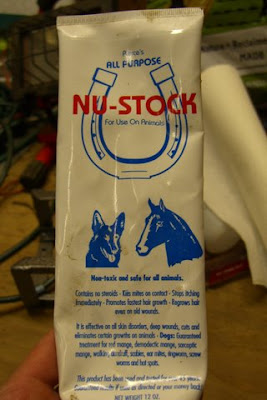 I've not seen any improvement as a result of these treatments and the llamas trust me even less now that haltering them up generally means I'm going to touch them and do weird things to their hairless backs. They. do. not. like. this.

Dr. Sarah did say that, while it is possible that they are suffering from some kind of mineral deficiency that began a long time before the girls ever came to me, veterinarians are starting to see more and more llamas and alpacas with this condition. Skin tests sent to the lab return nothing conclusive and treatments are hit and miss. Finding a diagnosis for this is apparently much like finding a needle in a haystack.

I will do more research on mineral deficiencies and possibly give Kai and Toni a shot of long-acting antibiotic based on the advice of Claire, who has a llama with a very similar skin condition who has since made a very good recovery.

When Sarah and I were finished with the llamas and I took off their halters to let them out of the barn, they didn't run off in their normal "every-gal-for-herself" high-tailing style, rather, they hung around, quietly watching what was going on with everyone else still locked in the barn: 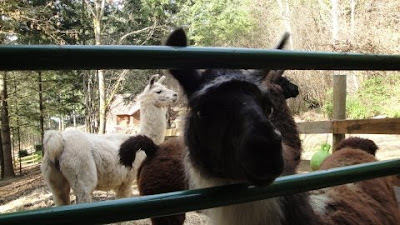 Now it was Chester and Beau's turn. The donkey boys were due for their Equine 5-way and West Nile virus shots. Here is Dr. Sarah loading up her syringes and Chester watching her every move. He's always watching what everyone is doing around him, even when he's pretending not to: 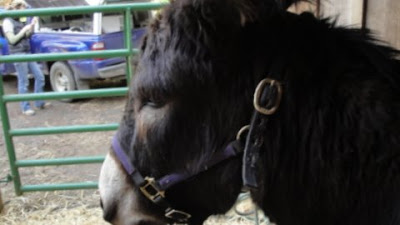 After his shot, he, too, like the llamas, was released to the other side of the fence. But he still watched Dr. Sarah's every move: 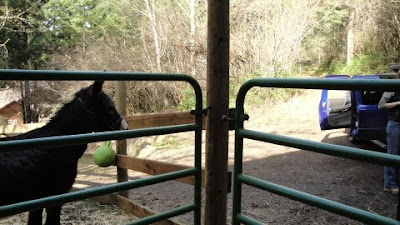 Next up was Beau. He got his shots and was very brave about the whole thing. Then it was time to check his eye. It had been dripping and tearing excessively. Dr. Sarah was concerned about a possible ulcer, so she squirted a fluoroscine stain into his eye so she could take a look. Anything abnormal on his eye would stay bright green: 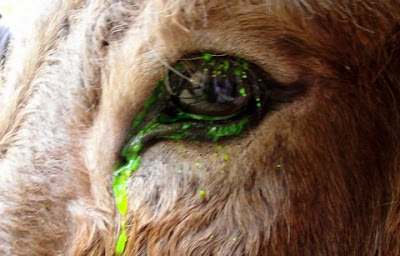 Fortunately, she saw nothing out of the ordinary, which left her to conclude that his problem was a clogged tear duct: 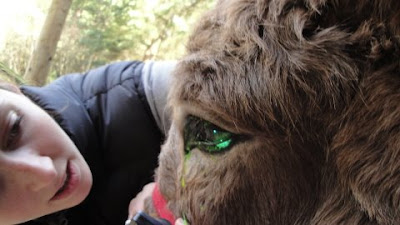 She was going to try to flush the duct so that it would drain freely again and got the tubing ready for the procedure: 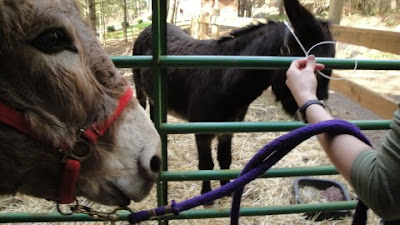 Chet commiserated with Beau through the fence: 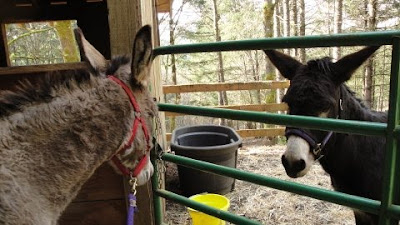 The llama ladies continued to provide backup support,though they had moved down the hill a bit since Chet had joined them: 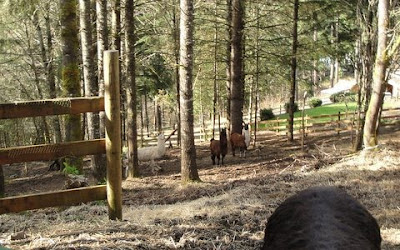 This was the scene fifteen minutes later when Dr. Sarah couldn't find Beau's gland: Dr. Sarah was on the phone with the clinic, Beau was waiting patiently, and Chester kept nagging me to explain to him what was going on: 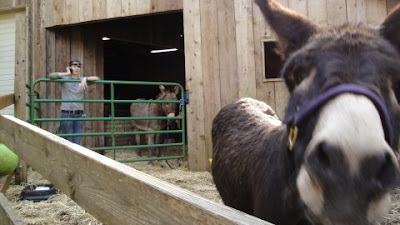 We found out a day later that the nasolacrimal duct in a donkey is located in a much different place than in a horse. See all the important, new stuff Dr. Sarah is learning about DONKEYS by coming to visit me?

Before she left, Dr. Sarah provided me with something new for my animal first-aid/medicine kit: 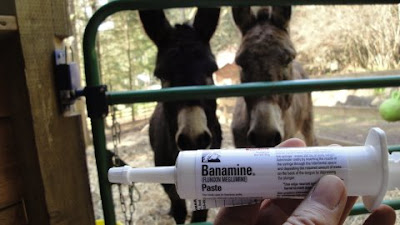 This is a potent, non-narcotic equine painkiller with anti-inflammatory and fever-reducing properties - good to have on-hand for any of those unexpected emergencies when a vet can't immediately get to you.

I'm thinking I really should have become a vet.
Posted by Danni at 8:50 PM