WARNING: There are a few pictures of Reggie's injury and blood included below. If you're squeamish, consider yourself warned. 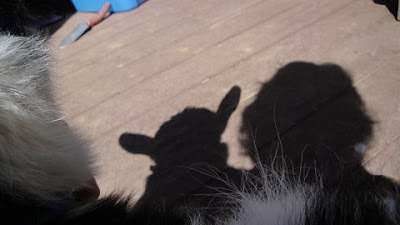 You might recall in my post, My Romantic Life on the Farm last week, I mentioned - among other farm animal health challenges - my goat Reggie's scur accident. (Scurs are partial horn regrowth that can occur after a goat kid has had their horn buds burned off, a.k.a. been disbudded). Reggie had somehow managed to hurt the top of his head, tearing off one scur and leaving the second one cracked and bloodied.

At the end of that post, we (all the animals and I) were waiting for our small town vet to arrive at 3:00pm. This is what happened from then on...

Prior to the vet's arrival, I had the unpleasant task of trying to wash and disinfect Reggie's sore, little head: 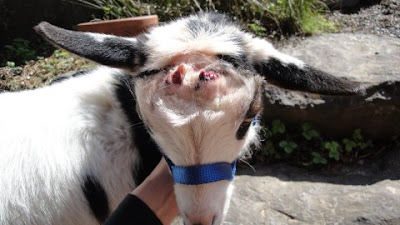 I used a diluted Betadine solution and a soft cloth: 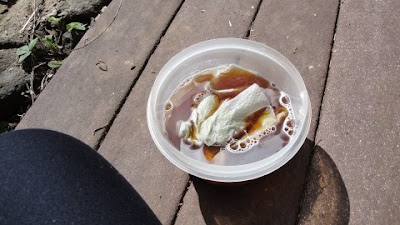 He didn't like me breathing on his head, let alone touching it, so you can imagine the noise he made as I tried to gently clean out the dirt and debris. After a few swipes, I decided it was good enough until the vet arrived. You can see the broken, but still in place, scur on the left. On the right side, the horn bud where he had ripped the scur entirely off is visible: 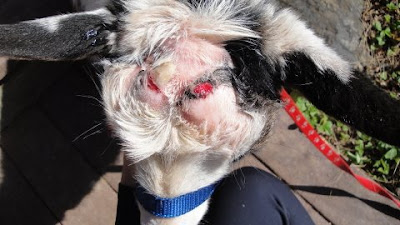 He was shaking badly again when I finished and so I scooped him back into my lap and held him tightly for a while. The sun provided us some much needed soothing heat: 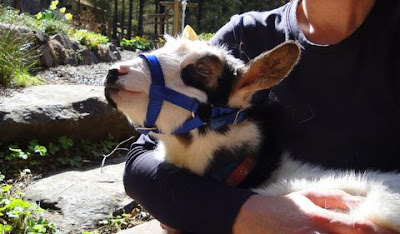 So soothing, in fact, that my baby fell into a deep sleep: 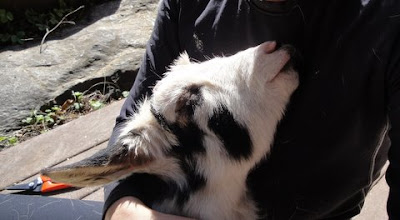 Earlier, up at the barn, the rest of the animals had been haltered and stalled in preparation for our local vet's (Dr. Sarah) visit: 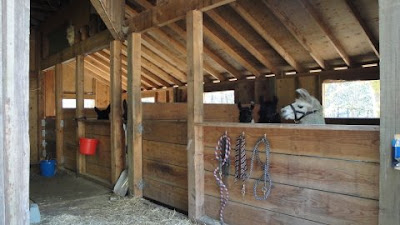 When Reggie woke up from his nap, I returned him to his goat house. When it was time to take him up to the barn to see Dr. Sarah, he hid from me. I knew his head was bothering him, he never hides. Pretend you don't see him - that's what I did, it seemed to make him feel better: 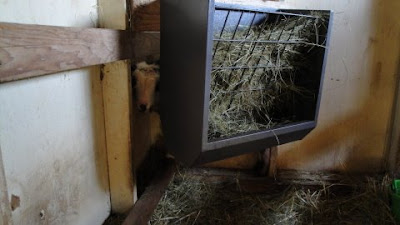 Once I got Reggie up to the barn, he had a bit more energy and entertained the donkey boys, Chester and Beau, for a bit: 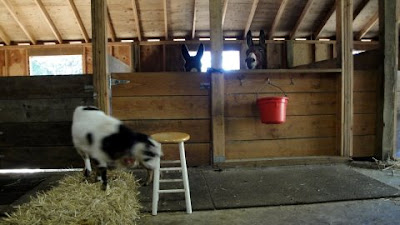 Reggie's enthusiasm was short lived, however. He became very agitated when he heard the sound of the vet's car. Even on a leash, he was bouncing around, trying to get away. This is not his normal style at all: 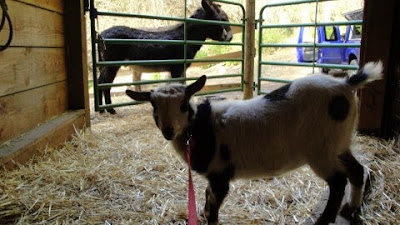 The vet examined his head, touching -to his dismay- the broken, remaining scur, and it came right off in her hand: 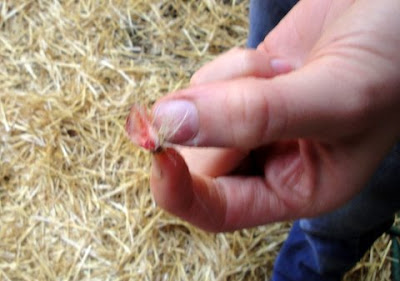 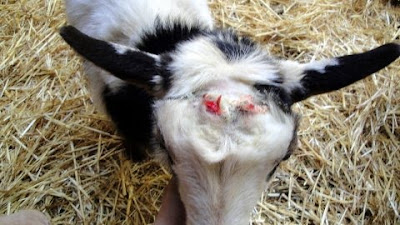 Carrot coin to the rescue. He loves his carrot coins as much as the llamas and donkeys do. Even pain and a bad case of nerves didn't prevent him gobbling it down: 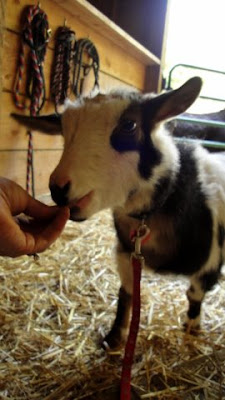 Dr. Sarah explained to me that Reggie was a suitable candidate for a second attempt at disbudding using the disbudding iron. Because his scurs are relatively small, she felt she would be able to kill all the horn cells that would allow regrowth. She emphasized to me that by doing nothing, allowing them to grow back and then trying to manage them through filing and occasional clipping, left Reggie open to injuring himself again as well as to infection.

I had heard that "re-disbudding" couldn't be done, so I was surprised that she was so easy going about this. I asked the same question about fifteen different ways until I was convinced she had successful experience with this and felt comfortable with what she was going to do.

Dr. Sarah then gave Reggie a sedative shot, a long-acting Banamine shot for the pain, and 2 different (long and short-acting) antibiotics in preparation for the disbudding: 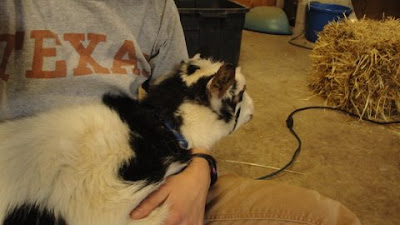 Then she had to shave around the horn buds again. He howled so horribly, I teared up and Dr. Sarah gave him another shot of sedative: 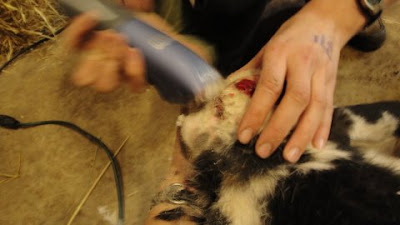 After that, he felt no pain. And I was the only one upset about the blood pouring from the top of his little head: 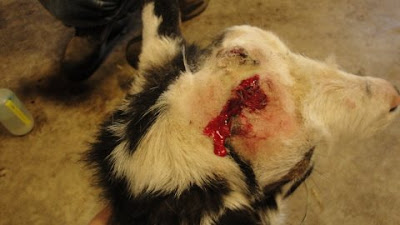 Meanwhile, the disbudding tool was warming up in the background: 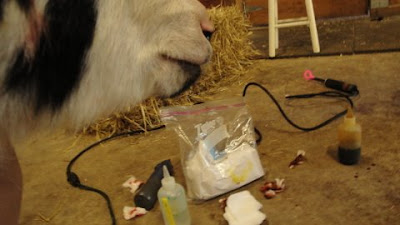 Looking back, the worst part of the whole thing was before Dr. Sarah ever got there. Seeing him shake so horribly and clearly be in pain was awful. Once she gave him the appropriate sedation and pain meds, I never heard another peep or saw any sign of discomfort from him: 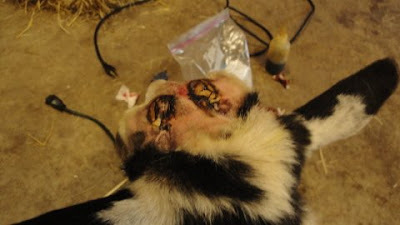 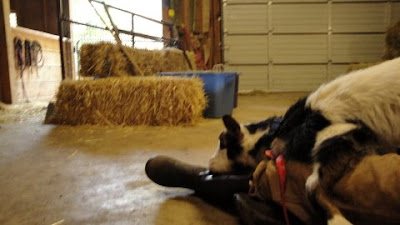 He didn't flinch when Dr. Sarah did the burning: 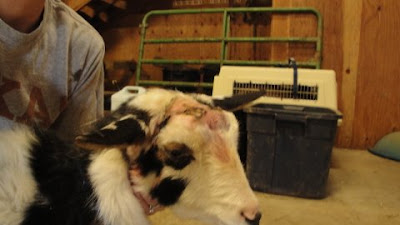 She was very thorough and is hopeful that she got all the horn cells so that there will be no regrowth: 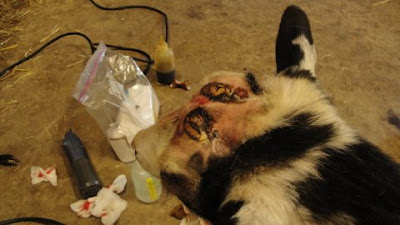 When we were finished, I carried him down the hill and put him in his cozy crate to recover from the sedation: 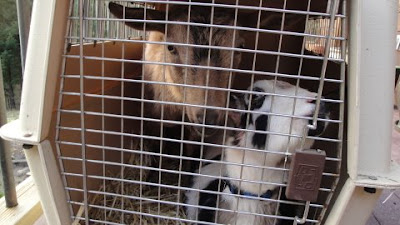 Pete insisted on being by his side: 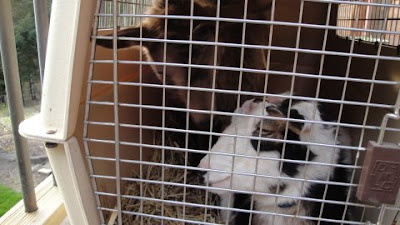 I just love this little guy so much: 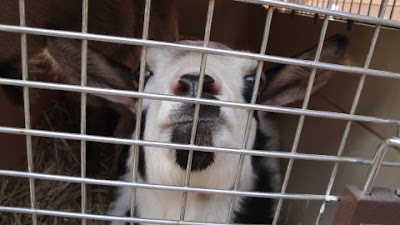 And now, more than a week later, although he looks a bit like Franken-goat: 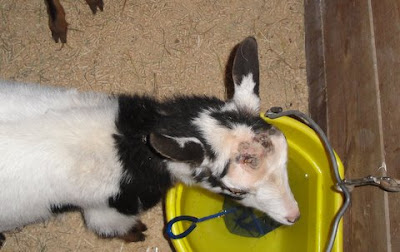 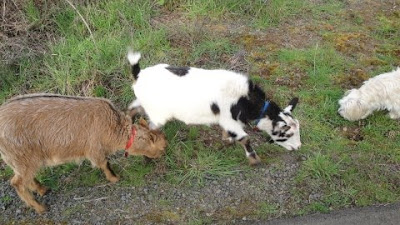 Energy and enthusiasm have returned: 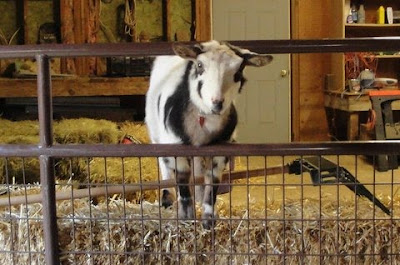 along with his extremely affectionate nature: 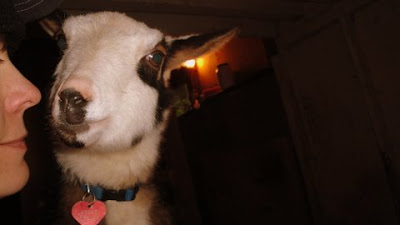 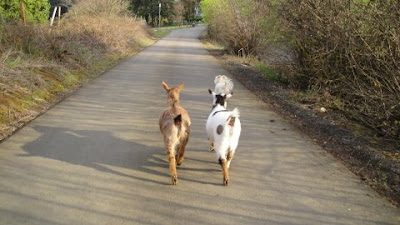