An evening with Herb Alpert 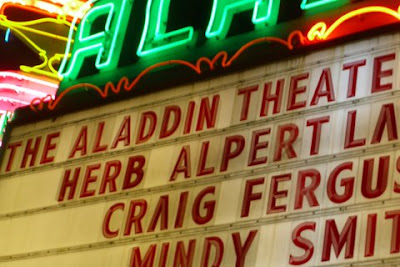 First of all, the comments that were left for me on my previous post, "Reliving a childhood crush", practically made me swoon. I never expected to have so many kindred spirits. WOW.

A few of you asked for an update on how the Herb Alpert/Lani Hall concert was, so here goes: It was AMAZING.

See this poor-quality picture? This is the back alley behind the Aladdin Theatre where Herb was playing. Can you just barely make out those two chairs in the road? They're holding a place for Herb's car. This made me laugh and feel kind of close to him at the same time: 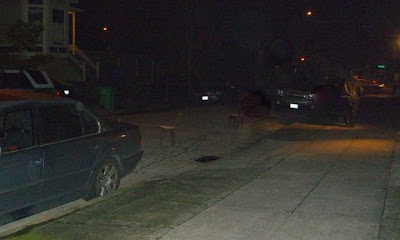 Here's the stage, pre-show. The backdrop is an original piece by Herb himself. He's been painting for forty-some years, he said: 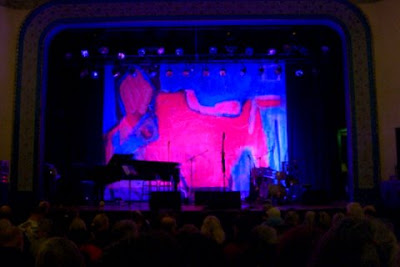 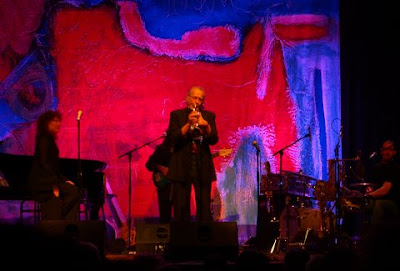 Lani Hall, whom I was not familiar with before this concert, has a gorgeous voice and is an incredible performer. Such a stage presence she has. She and Herb have been married for thirty-six (!!) years - and what chemistry they have together!

After the show, I walked down to the stage to get close to the trumpet. Herb's trumpet. So simple looking, but what a powerful instrument: 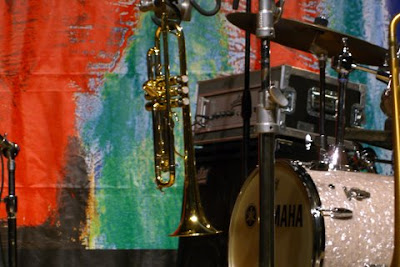 The trumpet on the right in the picture below is Herb's self-designed trumpet. See how it has two bells? One has a mute in it, the other does not. There's a small lever on the side that allows him to toggle back and forth, playing, when he desires, a few notes muted and then maybe a few unmuted...it sounds like there are TWO amazing trumpet players in the room!: 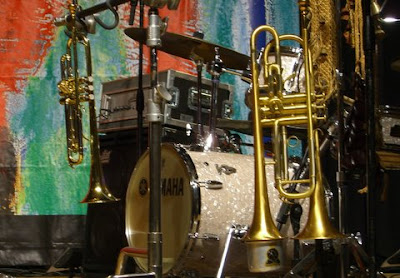 I came away that night realizing that Portland (it's not just me!) loves Herb Alpert. There was so much energy in the audience, it was palpable. I really believe that our enthusiasm fed him just a bit, because his version of "Besame Mucho" that evening was even more powerful than any other version I've heard (or seen on YouTube).

Here's just a short snippet from "Besame Mucho" played on Saturday night...I'm sorry the visual quality is so poor. This is his version of the song that is up for a Grammy this coming Sunday, 1/31. (and yes, that's totally my husband, hooting like a wild man, at the very end...)

Of course my guy bought me a concert t-shirt. But lest you think he's just all sweetness and light, he totally stole it from me and wore it to work today.
Posted by Danni at 3:20 PM