There was wine and there was music 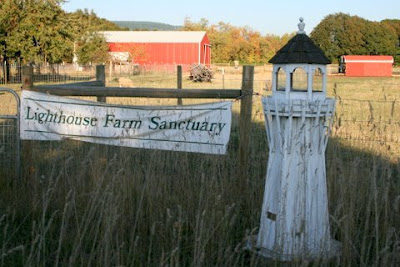 and it happened at Saturday's "Wine and Music at the Farm" festival held at the Lighthouse Farm Animal Sanctuary in Scio, Oregon.

A number of us volunteer "die-hards" arrived early to help clean out the barn and do set-up. There's nothing quite like a layer of clean straw to freshen up a place: 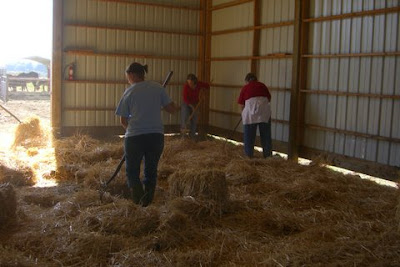 It's hard to believe this structure had multiple paddocks and scores of animals in it just a few hours earlier: 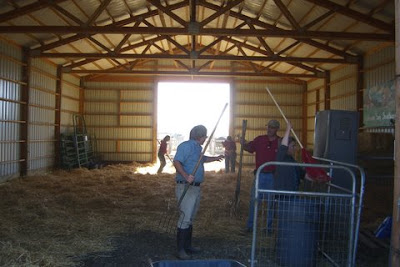 Plastic chairs and bales of straw were arranged for seating: 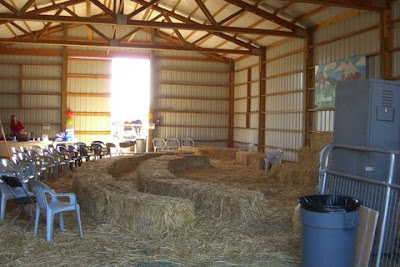 Food and auction items were set up on tables: 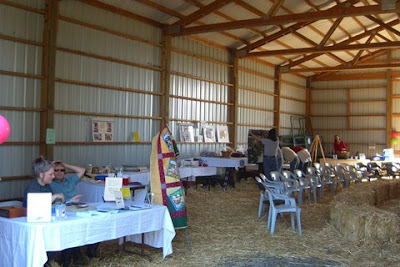 Music was provided by this fun duo: 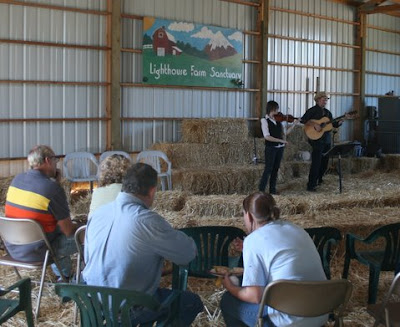 Interestingly, our very first guests hadn't RSVP'd as requested. Regardless, Spring and Summer, the goat sisters, were quite persistent about joining the party: 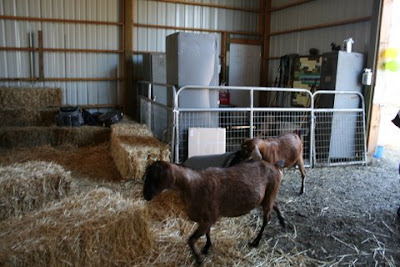 Spring couldn't understand why she was repeatedly denied entry: 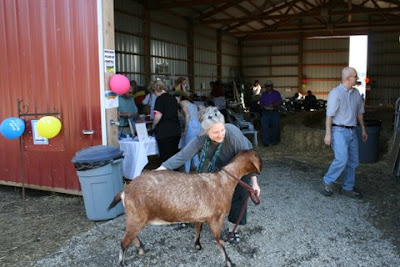 Human families (yup, that's my mom!) enjoyed wandering the farm, getting to know all the friendly and appreciative furry and feathered faces: 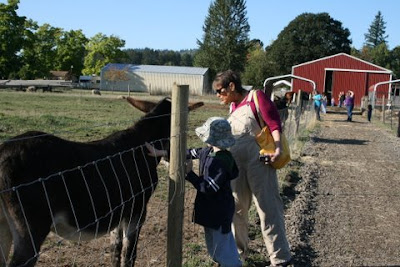 Oyte, the mini donkey, made a new friend. These two stood like this for a long time: 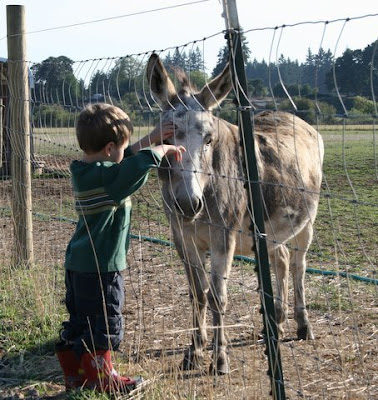 Happy kids and happy animals - these things make me smile: 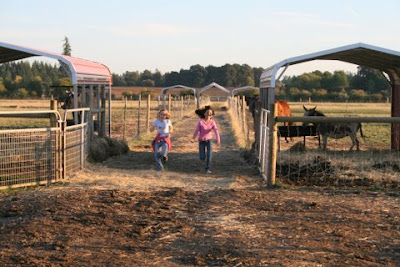 Luke the pig, abandoned as a tiny piglet in the city streets of downtown Portland, is a favorite among the kids. Of course, he loves the attention: 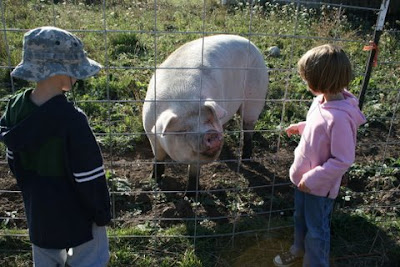 Do you remember me introducing Pepper about a month and a half ago? She's one of the two horses the Lighthouse Farm Sanctuary recently rescued from starvation. She's still very underweight and requires extensive dental surgery, but she is already looking a lot better: 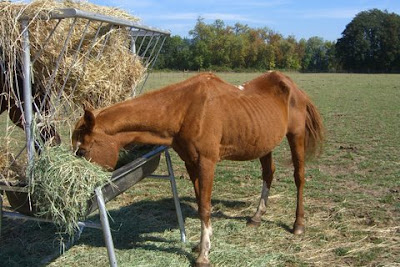 I had the opportunity to halter and lead her in front of the group so that Wayne, the founder of the sanctuary, could talk a bit about how she is faring since her rescue. She is the sweetest, gentlest horse I have been around in a long time: 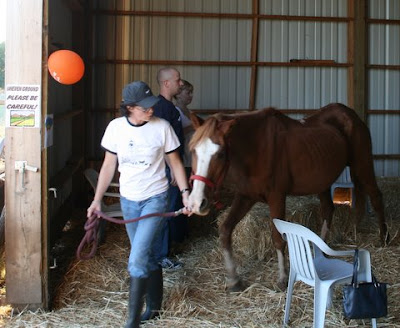 My heart aches for all she has been through: 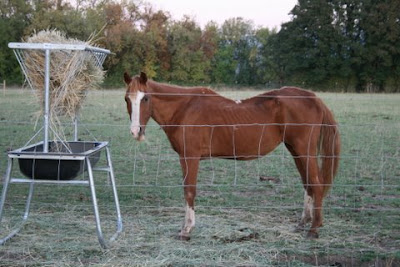 Jacks, the other horse rescued with Pepper, is looking wonderful: 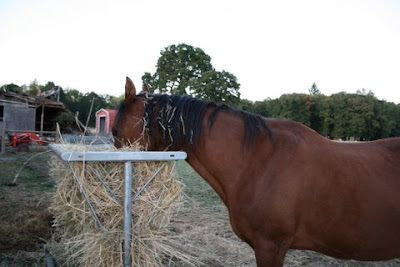 It was a lively crowd for a while: 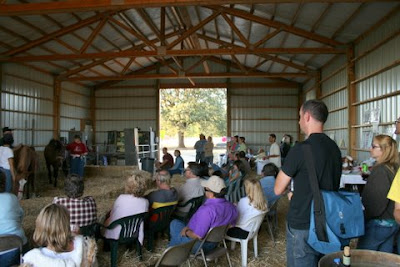 Yet, despite the fairly good turnout and a few generous souls, many people came early, ate the free food, visited with the animals, and then left without donating or contributing. Who am I to be angry or judgemental about this - everyone gives according to their ability, right? These are clearly tough financial times and I completely understand this, yet I still feel oddly taken advantage of. Maybe we didn't communicate our need well enough? I don't know. But let's hope that the people who felt unable to donate will instead give by spreading the word. Maybe they'll tell their families, friends, and colleagues about this farm and the vital role it plays in communities all across Oregon by caring for other people's neglected, abused and abandoned animals.

If the Lighthouse Farm didn't exist, who knows what would have happened to:

Oyte, the mini donkey, who used to guard a flock of sheep, but was abandoned by his family when they packed up their sheep and moved away - leaving him behind: 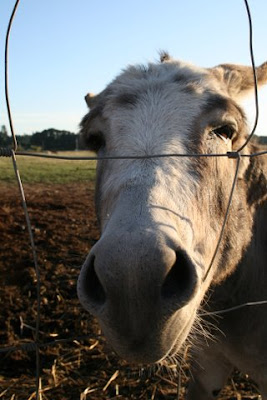 Jessie, the sheep, who fell off a truck and nobody noticed: 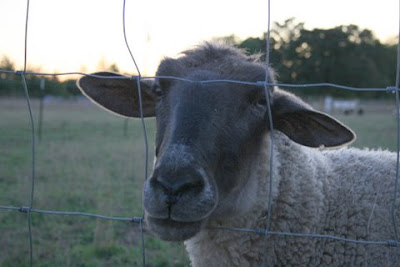 Chewy, the goat, abandoned by his owners: 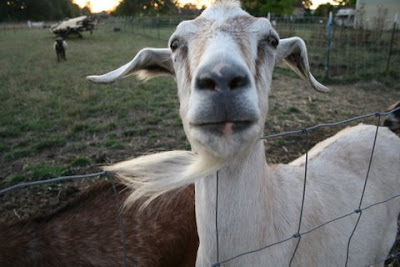 and Roy, the steer who was on his way to slaughter: 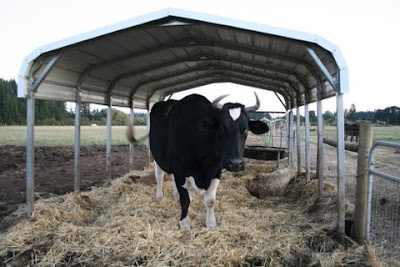 These are just a few of the faces who have been rescued by this farm and are now able to live, free from hunger and fear, at the Lighthouse Farm Sanctuary. 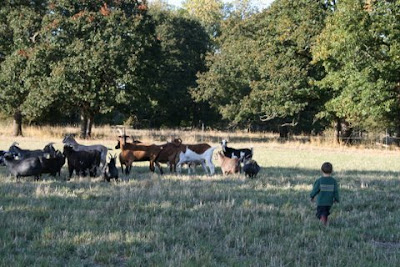