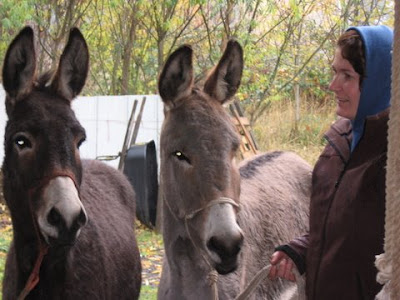 I received an update from Mary, the new adoptive mom to Brownie and Ian, the evening they arrived at their new home:

"Hi Danni,
The boys made it home safe and sound. They ran around the field for a bit then I moved them to a smaller paddock so that they wouldn't get too much long green grass right off the bat. There has been a bit of nose touching across the fence with Echo. They don't seem too certain about going in the barn yet....after the trailer loading episode it may seem claustrophobic to go inside. So, I left the light on in the barn with OPB* on the radio and their hay inside to encourage them to check it out on their own.
Take care, Mary"

Brownie and Ian in their new field: 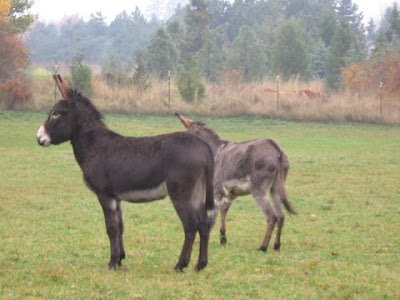 Brownie and Ian sticking really close together while they get to know their new home: 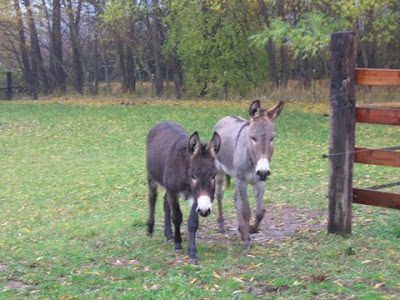 Within the last week, Oregon has had an incredible amount of rain and there were reports of flooding occurring everywhere. I heard on the radio that a flash flood warning was in effect for Mary's town, so I sent her an email asking how everybody was doing. I received this update:

"Hi Danni,
The boys are doing great. They are all together now but not yet quite to the point of being "chummy" with Echo. He stands and watches them play together at length, but when he walks over to join them they run away or turn their butts to him. It's only been a week, I think the bonds take a bit longer to form. Overall they seem happy. The flooding did not concern us over here because we're on the west side of the valley. It's nice to see the sun again!
Take care, Mary"

Special message to Brownie and Ian: Be nice to the big, new guy. He may be a little different from you, but one can never have too many friends!!
Posted by Danni at 11:09 PM