And then there was only one... 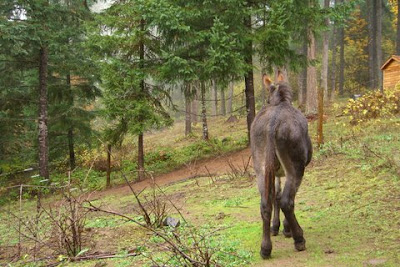 Every blog has its distinct personality, have you noticed? I believe that finding one's personal voice is often simply a matter of writing some stuff down and seeing what comes out. Based on this, for the most part, I believe my blog is generally light-hearted, colorful, often humorous and, well, pretty dang simple. I choose not to spend a lot of time analyzing myself or discussing my emotions or deep thoughts. I am 98% of the time an extremely private person.

So, for this reason, I apologize in advance for today's blog. It's going to be a bit of a mixed bag. There is some happiness, lots of personal sadness, more happiness and, maybe, just a bit more sadness. Ultimately, the bottom line to this story is a happy one. But the living through it has been a bit rough on this old gal (me).

Get on with it, why don't I?! Well, I think I shall. Deep breath. Can you guess what's coming?

Two of my adored-beyond-belief donkey boys, Brownie and Ian: 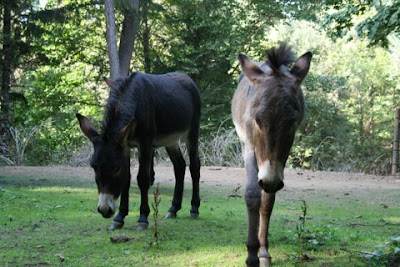 went to a new home this weekend.

In honor of this important event, on Saturday, I donned their favorite hat: 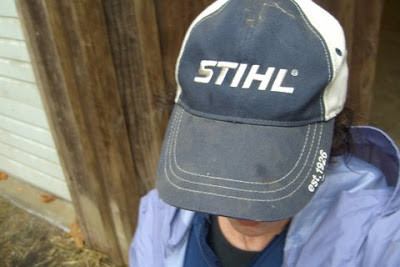 They love this hat: 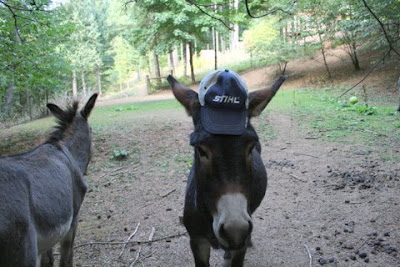 We've always had good times with this hat: 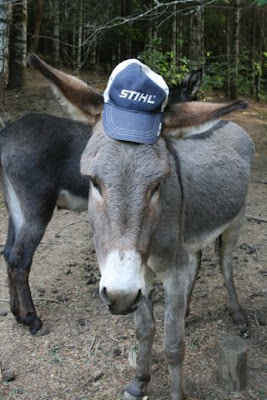 Yet, despite the very happy outcome for these boys, this day was, without a doubt, the hardest day of my life here on Critter Farm. I'm giving serious thought as to whether I may just not be cut out for this donkey foster-mama business, after all.

The donkeys have already taught me so much. I learned even more this weekend. Brownie and Ian were to be picked up around noon so, I was up at the barn early, feeding, patting, and loving up. This is also the time I generally give the "behavior instructions" for the day: "Be good boys, don't fight with each other, and lift your feet when asked for hoof picking. The trailer ride is going to be a little scary - you didn't like the one you took to get here - but at the other end is a wonderful new farm, a loving family and a new horse friend to get to know."

And as I'm standing there, talking out loud to them, doing the tasks for them that I've done for these last six months, I crumble. Completely. Fully. I mean, I really put my heart in it. Now, I'm not an easy crumbler. I don't crumble often. I don't like to crumble. And I always try never, ever to cry. I was so mad at myself.

It was spellbinding to me that Brownie and Ian were both so responsive to the change in my mood. It was really quite amazing. Brownie wouldn't leave my side. Every way I turned, he matched my move with his body. Ian would simply stand right up against my back. I would put my hand out and Brownie would rest his muzzle in my hand: 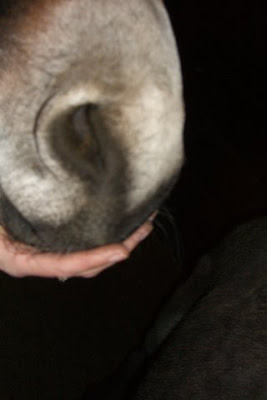 So, we all just huddled together for a while and were quiet.

After a bit, it was time for drink. It was cute how hard they tried to get both their heads in the bucket at the same time: 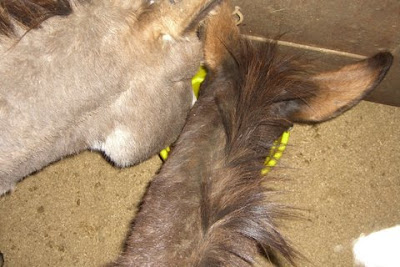 Then it was time for more silent hugs and scratches: 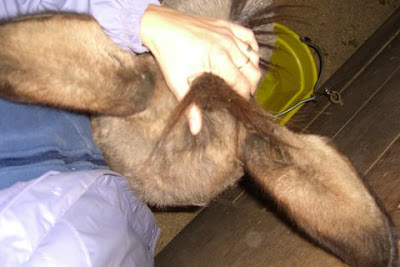 All ears turned toward the driveway when they heard the truck engine: 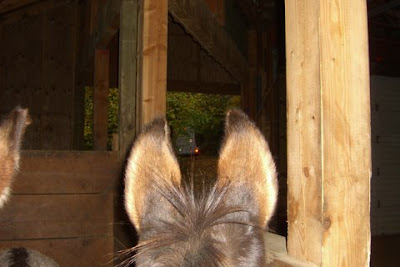 It was time to go. Now, remember, donkeys really need to be convinced that they want to do what you want them to do, so trailering a donkey is not usually an easy thing.

I was able to lead Brownie all the way up to the entrance of the trailer: 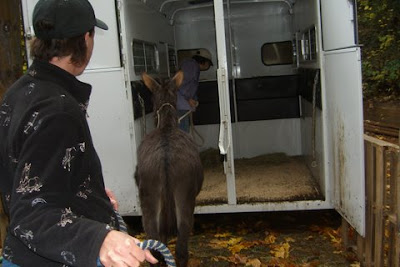 We had practiced walking on a lead often enough, but it wasn't a surprise, really, when Brownie stopped cold, locked his legs and wouldn't budge when it came time to step up into the trailer: 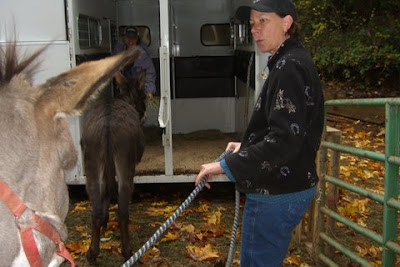 Mary, his new adoptive mama, used a strap to apply some gentle pressure behind his rear, and this was just what he needed to coax him in: Sadly, it was not so simple with Ian. And this is the part of the story, now, that gets really ugly. Ian the timid, Ian the mild, Ian the sometimes shy would simply not go into the trailer. It didn't matter that Brownie was there waiting for him. It didn't matter that Jim was coaxing him with baby carrots and handfuls of hay. He wouldn't get within about 2 feet of the back of the trailer. - This is really hard for me to write. The few other times I've recounted this part of the story, I've lost it completely. I will not be sharing the pictures. - The ground was wet outside the trailer and with the little bit of struggling we had to do to get Brownie in, the ground was now wet *and* slippery. When Ian locked his legs and refused to budge and we pushed from behind, he literally went down. As in on the ground...he collapsed. He just lay there, his front legs underneath the trailer, his head cocked at a weird angle against the trailer door and his body lying in the mud. Everyone had their own idea of what to do next and started talking at once. I just wanted everybody to shut up. I'm standing there, shaking, and trying, with all my might, not to ball and scream at everyone around me to just get the hell away from him.

It was so awful. I wanted to curl up on the ground with him.
Fortunately, he wasn't hurt. Jim loosened his grip on the lead rope so Ian's head was free. Mary released the strap that was supposed to coax him from behind. I tried speaking to him in a calm voice. Ian, then, simply got back up.

Ultimately, Jim and I did the old "link our arms, lift him from behind, and walk him into the trailer" routine that we've done successfully three other times before. It worked like a charm.

Once they were safely inside the trailer, we all heaved a collective sigh of relief - even the donkeys: 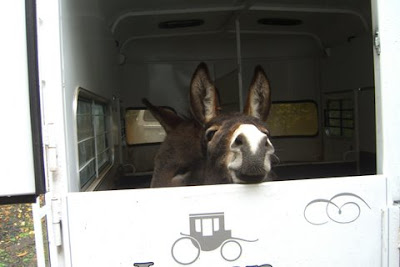 I truly believe Mary will provide a lovely life for Brownie and Ian: 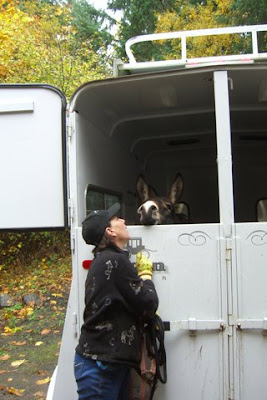 The boys will now live in the exquisitely beautiful, world-renowned Columbia Gorge in the heart of apple country. They will be companions to Mary's nine year old Mustang, Echo, that she adopted through BLM as a weanling: 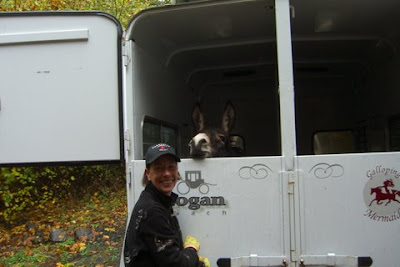 But, for the farm girl left behind, I will never, ever forget the joy these two have brought me: They helped me find my written voice: 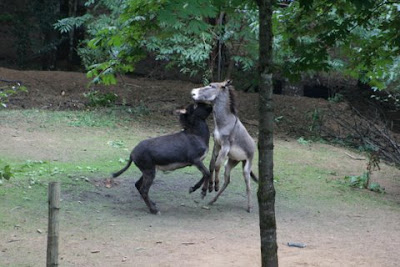 They brought me a new friend: 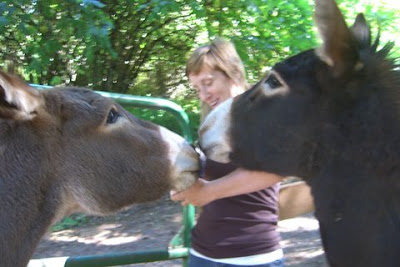 and they completely ran away with my heart: 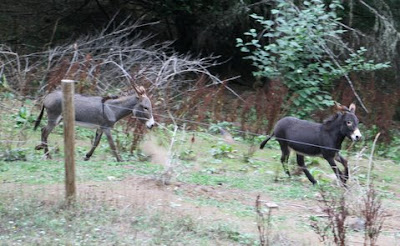